Table of Contents hide
1. What Benefits Can a Gaming Laptop Offer?
2. Gaming laptops’ negative aspects
3. What A Gaming Laptop Should Have?
4. Conclusion

Powerful gaming laptops have always piqued interest. Who wouldn’t desire the strength of a desktop computer in a portable form? However, historically speaking, gaming laptops haven’t always been like that. Gaming computers in the past and this wasn’t all that long ago were large, heavy, and hardly portable.

When compared to a PC, are gaming laptops worth it? Today we will answer that question and let you decide. But before, let’s take a short detour into gaming laptop history.

It appeared for a while that only the most ardent enthusiasts took care of these computers. But nowadays, things have improved significantly.

Gaming laptops deliver the advantages of PC gaming in a portable and small package. They may be less expensive than desktop computers because they don’t need to be equipped with monitors or keyboards.

Purchasing a gaming laptop is a worthwhile purchase for those who enjoy playing games on the go. Nowadays, gamers have a wide selection of platforms when it comes to gaming. Of course, it’s a well-known fact that the PC or Laptop platform is the best. Laptop gamers value portability; PC gamers love the ability to upgrade their rigs.

What Benefits Can a Gaming Laptop Offer?

When compared to playing on a console, PC gaming has several advantages, especially with the advent of gaming laptops.

Gaming laptops offer outstanding gaming experiences in a portable package that is ready to go wherever you go.

The portability and convenience of a gaming laptop, as well as the fact that it uses less power than a standard PC and has higher-quality components, are some of its main benefits. 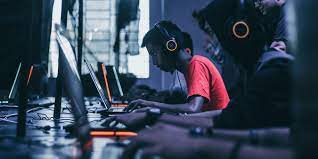 In general, gamers love playing all the time, but a PC gamer’s problem is that they don’t want to carry around their 60lb to 80lb gaming PC. Laptops for gaming can weigh around 5lb, meaning they are perfect for gaming on the go.

A gaming laptop also carries a decent amount of battery life, many of them lasting 8 hours. So even if you are traveling on a train or plane, you can play your favorite games without needing to plug the laptop in.

Choosing a gaming laptop makes more sense than ever these days because computers are used for more functions in daily life and business. Since laptops are becoming more and more common in office and educational settings, utilizing a gaming laptop will allow you to not only finish your studies wherever you are but also play your favorite games. Gaming laptops with the most recent Intel i7 processors deliver nearly desktop performance in a portable design.

Unfortunately for many, done are the days of playing games endlessly. That is why a gaming laptop perfectly fits gamers, as many must work from their homes or commute. A gaming laptop can perform the same tasks as a standard laptop, meaning you can safely get a gaming laptop and know it will work perfectly fine.

Some laptops for gaming can even turn into tablets! That means you can have a laptop for gaming and work, and even turn it into a tablet so you can watch your favorite series in the comfort of your bed. So be sure to check if the gaming laptop you are looking at has a detachable screen that turns into a tablet.

While one of the most significant reasons for getting a laptop for gaming is its portability, sometimes you want to settle down with it. The beauty is that many modern laptops allow you to connect to a monitor or even a TV, so you can essentially turn it into a PC. On top of that, you can use a controller, mouse, or keyboard to play your favorite games.

Even if you have mobility freedom, you can still choose to place it somewhere and play. A huge bonus point for gaming laptops!

As mentioned before, gaming laptop brands are close to having the same hardware as a PC. Some mid-range gaming laptops have 10th-generation Intel Core i5 processors. That means you can play on high settings without making your laptop burn to a crisp.

And if your pockets are wide enough, you can get some gaming laptops with 64GB of RAM. That surpasses many budget PC gaming rigs by a long shot! Of course, 64GB of RAM is too much for any modern game; 8GB to 16GB is more than enough for any gaming laptop.

The amount you pay for a gaming laptop comes down to how much you are willing to pay as they can get as high as $4,000 to as low as $300. Both limits will allow you to play games, so don’t worry about that. The amount you pay will ultimately influence the way the game looks, the gaming laptop’s performance, and the number of games you can have installed.

Of course, it depends on the gaming laptop brands as some may add additional features. Most of the hardware is to maximize all of the possible graphic settings. While not needed, it does make the gameplay experience astonishing.

A mid-range laptop can satisfy most gamers, as it still allows for high graphic settings and quick performance.

You will still be capable of playing most modern games, but you won’t play them on high settings, which is fine, as graphics is not everything for a real gamer.

As already stated, the best gaming laptops, in general, are made for moving around. That means that laptop manufacturers make sure to create a sturdy chassis for the laptop. Granted, it wouldn’t endure a 300ft fall, but it will survive a shortfall.

Some manufacturers even sell protective cases to add more protection in case of falls or bumps. You can never go wrong with extra protection!

When it comes to gaming laptops, the devil is in the details, from angular shapes and RGB lighting on the rear lid to a backlit keyboard and high-definition audio.

Gaming laptops typically can be a little of a hassle if you travel regularly and need to keep your bags light.

Game laptops often weigh 6 to 8 pounds due to the premium technology within them and the larger battery that powers gaming performance. The weight of the charging block that you will unavoidably need to bring with you must also be taken into account, bringing the range closer to 8 to 11 pounds, depending on your laptop. In contrast, some contemporary everyday laptops only weigh one pound.

While the flexibility to upgrade and customize gaming desktops is a big draw for the platform, there aren’t as many alternatives for doing so with gaming laptops. Although the SSD and RAM can still be changed, many other parts, including the processor, are built into the motherboard and cannot be upgraded.

Despite this, it’s crucial to consider your processing requirements going forward so you can prepare to employ a system that won’t need to be upgraded in the future.

When buying a laptop, durability, and power are crucial factors to take into account. Though they do have a bigger battery, gaming laptops also have more power-hungry internals to contend with.

The normal battery life of a gaming laptop is roughly 7 hours when used casually for online browsing and simple tasks. Battery life may only last two to three hours while playing games, though.

Gaming laptops have powerful technology, but that also means they generate more heat. Gaming laptops can be quiet and cool when not in use, but as soon as you start gaming, the thermals heat up and the fans start to run.

Gaming laptops often include larger heat sinks and quicker fans to keep up with the increased temperatures and remove all the heat.

Some more recent gaming laptops use vapor chambers rather than heatsinks, which cover the entire space of the chassis with cooling pipes to disperse heat rather than just placing a small heatsink over the CPU and GPU.

What A Gaming Laptop Should Have?

On gaming computers, GPUs vary equally as much as they do elsewhere. Your gameplay requirements should be taken into consideration when choosing most gaming laptops.

An RTX 3080 GPU is what you need if you want a high frame rate and the highest resolution overall. Although this top-of-the-line GPU can deliver exceptional performance, it does so at a premium cost. The Intel Iris Xe graphics card might be a fantastic place to start if you don’t have a lot of money to spend.

Battery life on laptops can last anywhere from a few hours to all day. Gaming laptops’ battery life has improved over the years, but it still falls short of that of energy-efficient laptops.

Despite this, gaming laptops do have a reasonable amount of battery life given the powerful internals. You can get by for a whole day with minimal utilization of daily tasks and the web. But if you choose to game, you might want to make sure your charger is close by because your battery life might only last for two to three hours.

Gaming laptops offer a choice of storage options, just like many other laptops. Solid-state storage is what the majority of contemporary gaming laptops only offer because it is quicker and more dependable than hard disc storage.

Keep in mind that the transfer speeds of solid-state storage might vary greatly. M.2 SSDs employ the most recent interface for storage memory and offer better performance than earlier SSDs if you’re seeking the highest performance storage.

Though there aren’t many possibilities, it’s up to you to decide on the gaming laptop’s size. You must evaluate how frequently you will be traveling with your laptop because the added size will matter. Gaming laptops range in size from 14 inches to 21 inches.

However, the additional space does improve the overall experience if you intend to game.

Are Gaming Laptops Worth It? Yes, They Are!

Despite being less powerful than their desktop counterparts, gaming laptops often get criticism for being highly pricey.

The portability of the laptop is one of its selling points, so contrasting it with a gaming PC or console may not be the ideal approach.

What you receive in a gaming laptop worth has a long lifespan, a strong graphics card that is already installed (saving you time), a stunning display, good battery life that can compete with the top gaming monitors, and a computer that can easily handle any workload.

Hopefully, you have seen that a powerful gaming laptop can perform almost like a PC. Plus, it has lots of extra features a gaming PC doesn’t have, like mobility and durability.

On the other hand, desktop computers and consoles tend to be heavier and harder to transport. If you are thinking about buying a gaming laptop or entering the ranks of PC gamers, then a gaming laptop is the way to start.